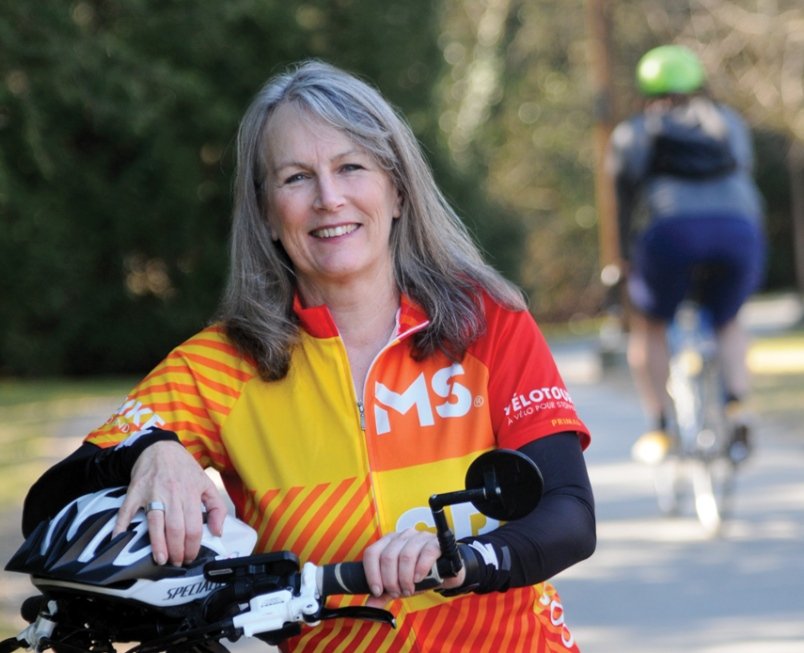 North Vancouver resident Marilyn Lenzen, who lives with multiple sclerosis, uses her e-bike to stay healthy and manage her disease. New research suggests that income, education and lifestyle factors could play a prominent role in how MS progresses in people who are already living with the disease. photo Mike Wakefield, North Shore News

She couldn’t even walk herself down the block, let alone take a stroll with her kids.

“Shortly after I was diagnosed with multiple sclerosis I had a very bad relapse and it was very difficult for me to walk,” Marilyn Lenzen, a lifelong North Vancouver resident, told the North Shore News recently. “My children’s school was half a block away. I couldn’t take my kids to school.”

Coming up on the 20-year anniversary of first hearing the potentially life-altering phrase, “You have multiple sclerosis,” Lenzen is reflective when talking about the early struggles she faced with the disease, explaining how the initial warning signs – fatigue, pain, numbness – gave way to a proper diagnosis followed by some big changes.

“I had to quit work outright to look after my body so that it could heal,” said Lenzen.

Describing herself as a very “positive Type-A person,” Lenzen was determined to not let the disease get the better of her – she saw it as a challenge. She set goals for herself.

“Talking with my neurologist it was very key that I needed to do some things that would alter, or slow down, the course of the MS progression,” she said, noting that step by step, day by day, she summoned the strength to walk her kids to school, and then she turned that accomplishment into an even bigger one: getting herself down to the seawall for a walk. It might have left her exhausted, but she persevered.

A few years later Lenzen – who has relapsing-remitting MS, which means she might suffer an attack before slowly regaining her strength again – even managed to take up biking again with the help of electric assist.

“I still get tired, but for me, what I’ve found is the secret for me right now to keep my strength is I have adapted my fitness to cycle using an e-bike,” says Lenzen.

She’s aware how lucky she is to be able to do that.

For a person with MS the ability to live a healthier lifestyle can lead to better overall outcomes in terms of quality of life while living with the disease and with how it ultimately progresses.

“Often with employment comes extended health – extended health helps pay for physio, it helps to pay for additional drugs to manage the symptoms of the disease,” explained Lenzen. “With higher income you can afford to make some healthier food choices.”

New research from a study involving researchers from Wales and the University of British Columbia supports what many like Lenzen and others living with MS may already know: that income and education levels have a profound effect on the disability progression – such as difficulties with walking and other chronic issues associated with the disease – in multiple sclerosis patients.

The study, which was published recently in Neurology, the medical journal of the American Academy of Neurology, included a total of 3,113 patients with MS from both Canada and Wales. Researchers examined the association between socioeconomic status and the disability outcomes and progression of the disease in MS patients, establishing a link between lower-neighbourhood income and education levels and a higher risk of disability progression.

Dr. Helen Tremlett, a professor in the division of neurology at UBC and Canada Research Chair in neuroepidemiology and multiple sclerosis, is the study’s senior author. The study is important, according to Tremlett, because little research has been done when it comes to socioeconomic status and disease outcomes once somebody is already living with MS.

“We don’t fully understand what drives disease progression in multiple sclerosis. We don’t know why two individuals can be do so different in terms of how they fare over the long-term,” said Tremlett. “Understanding all the different pieces that might be related to how their disease progresses we think is very important. This could be just one component of many that relates to how the disease progresses.”

Factors such as a neighbourhood walkability, access to good food and social networks, and quality of housing could be important when it comes to a MS patient developing, for example, a co-existing disease which then might make their multiple sclerosis fare even worse, according to Tremlett.

“It’s the first time we’ve actually been able to assess it and measure it and then show, yes, it is related to long-term outcomes in MS,” says Tremlett.

Asked if the neighbourhood income and education aspect of their study would have health-care applications outside of MS, Tremlett says she hopes the study could encourage other researchers to look more at this question in the context of other diseases.

The findings of the research are also relevant when it comes to the planning and development of local services for people with MS, she added.

For Lenzen, she’s encouraged by the research because it demonstrates how living a healthy lifestyle, to the best of one’s ability and means, can be important for those with the disease – and how the disease ultimately progresses.

“There’s things that you can control within your own lifestyle that can really help you control the disease,” says Lenzen. “It gives that empowerment back to the person with multiple sclerosis.”