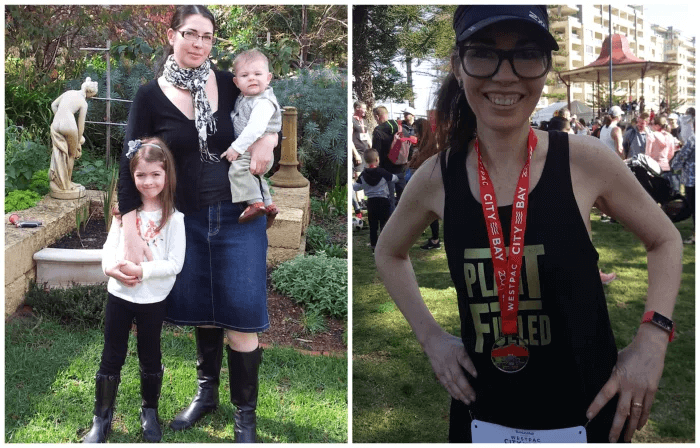 'Now I am symptom-free. I have had no new lesions or relapses. I feel fitter and healthier than I did in my 20s'

Rebecca Stonor transformed her physique and health on a low-fat, plant-based diet (Photo: Supplied to Plant Based News)

A scientist has revealed how she controls the symptoms of Multiple Sclerosis (MS)* - and has lost 50lb - on a plant-based diet.

Rebecca Stonor, a wellbeing officer, and plant-based nutrition wellness advocate - as well as a plant scientist - started having health issues more than four years ago.

She told Plant Based News: "I had issues with my vision. I thought I just needed some new glasses but when I lost color vision in one eye, I knew something was wrong.

"I Googled what this meant and was immediately concerned. An ophthalmologist soon said the words I didn't want to hear - 'it looks like you have Multiple Sclerosis'."

According to the National MS Society, the condition 'involves an immune-mediated process in which an abnormal response of the body’s immune system is directed against the central nervous system (CNS). The CNS is made up of the brain, spinal cord, and optic nerves'.

The symptoms include fatigue, weakness, walking difficulties, pain and itching, sexual problems, bladder problems, and depression among others.

Stonor herself suffered a range of symptoms. "Among with vision loss, I also had numerous sensory and cognitive deficits. I would mix words up and blame it on lack of sleep. I had trouble doing up buttons and often felt like I would just collapse," she said.

She decided she wanted to learn more about the condition - and see what steps she could take to try and mitigate the symptoms.

"Having a background in science I turned to the scientific literature to work out how I could protect and heal myself so I wouldn't end up in a wheelchair," Stonor revealed.

"I was only 40 years old, had two small children and was worried I'd be a burden on them and my husband.

"Quickly it became apparent that MS is a lifestyle disease. I found evidence that a low saturated fat, whole food plant-based diet could prevent future relapses. I also began reducing stress with meditation and exercising daily."

As a side effect of her plant-based diet, Stonor also found herself dropping a significant amount of weight - 50lb (23kg).

"Doing some calculations online for body mass index (BMI), which is an indicator for a healthy weight range, it turns out I was pre-obese," Stonor has written in a blog post about losing weight.

"I'm tall so people always said I "carried it well", meaning, they didn't think I was really that fat. Turns out it wasn't doing me any favors...An added side benefit of just eating plants was that the weight melted off me. I eat large quantities of food every day until I'm completely satiated and I don't put on weight (unless of course I start eating too many nuts, but that's another blog!)."

Now four and a half years after being diagnosed with MS, Stonor is symptom-free.

She told PBN: "I have had no new lesions or relapses. I feel fitter and healthier than I did in my 20s.

"I share my story via my website and social media, teach workshops and partner with a friend in cooking classes to promote the power of a plant-based diet to prevent and heal chronic illness."

NOTE: Plant Based News is not a doctor. This article is not a substitute for medical advice. If you have any health concerns, you should visit a health professional.

*Find out what the National MS Society says about diet here