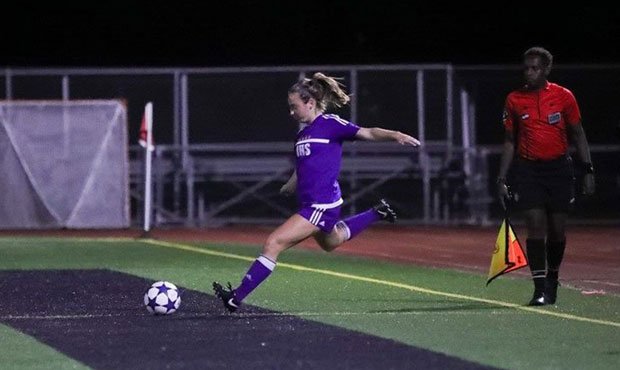 A multiple sclerosis diagnosis would come as a shock and a scare to anyone. But for local soccer star Claudia Longo, the revelation that she had a chronic neurological disease was no reason to give up her athletic dreams.

Longo has played soccer since age 5, playing on the ISC Gunners FC for 10 years. During her time playing soccer at Issaquah High School, the team won the state championship twice.

“I’m super grateful, I’ve made friends for life, both at Gunners and at Issaquah,” she said.

This past spring, Longo was all set to graduate high school and play soccer at the University of Washington in the coming school year when she started experiencing distressing symptoms such as fatigue and a numb, tingling sensation in her legs. After having tests done at the doctor’s office, Longo and her family soon learned that she had multiple sclerosis.

“That moment, I think about it a lot — hearing those words that I have multiple sclerosis was definitely life-changing, and I felt like my world had been turned upside-down, just because there’s so much that’s unknown [about MS], there’s a lot of ambiguity” she said.

What is multiple sclerosis?

MS is an autoimmune disease that affects the central nervous system through a series of relapses or a gradual progression of symptoms. There is no known cure, though a variety of treatments can slow the progression of the disease.

Because MS presents itself differently in every person, very little is known about it. Symptoms can range from fatigue and weakness, to vision problems, to tremors, to dizziness. There is no known way to prevent MS.

Longo was frightened when she first found out that she had the disease, but her neurologist, Dr. Mariko Kita at Seattle’s Virginia Mason, quickly put her mind at ease.

“As scary as it was and how much I didn’t know, now I’m so at peace with everything and know I’m in good hands, because of the amazing care of my doctors, my family, and again, the community,” Longo said.

Determined not to let MS hold her back, Longo moved onto the UW campus for pre-season training in August. However, MS symptoms such as headaches and nausea were so severe that Longo realized she “had to put [her] health first.”

Longo made the difficult decision to take a short break from school and soccer to focus on her health. However, she doesn’t plan to stay off the UW soccer field for long.

“I’m eager to put my cleats back on and I can definitely feel that coming in the near future,” she said.

Longo said that she has heard of plenty of people with MS who live very athletic lives and perform feats such as running a marathon on every continent.

“I’m setting my goals high to be a professional Division 1 soccer player,” Longo said. “Whether or not it’s been done or not, I’m not super sure, but I’m going to make it happen.”

Meanwhile, Longo is not staying far from the goalposts. She is back at her alma mater, Issaquah High School, assistant-coaching the Issaquah Eagles girls team.

“I have a special bond with that team and that school, so being able to coach the players and be a mentor for a lot of the players has been really good for me,” she said.

And the tight-knit Issaquah community feels quite a bit of love for Longo in return. At Tuesday night’s game against Lake Stevens in Issaquah, Longo’s Issaquah and UW teammates held an event called “Kick MS with Claudia” to raise awareness of the disease and support for multiple sclerosis research.

“Parents, coaches, players, everyone came together, and it was really cool,” Longo said. “It’s a testament to the community we live in.”

According to the Issaquah Reporter, the players collected over $2,500 for MS research in the stands at halftime, with another $5,150 coming online the next day. To donate to the effort, visit the Issaquah School District website.

“I’ve been involved in a lot of those events on the other end, planning them, and doing all of that, so to be on the receiving end was something that was really special,” Longo said. “And I’ve said this before and I’ll say it again — but it was something bigger than myself. It was for all those who are living with MS, struggling with it, being active, everyone — and that’s what I was trying to get across.”

Longo gets her spirit from her mom, who has battled breast cancer, as well as her dad and her coaches. She keeps a positive attitude and a fiery hope that everything will turn out for the best. Her Christian faith gives her the strength to face each challenge head-on.

“God has me in his hands, and I’m just going to face forward, deal with what comes at me, and keep that smile going, if I can,” she said.