‘I Have MS—and I Finished 50 Marathons Since My Diagnosis’ 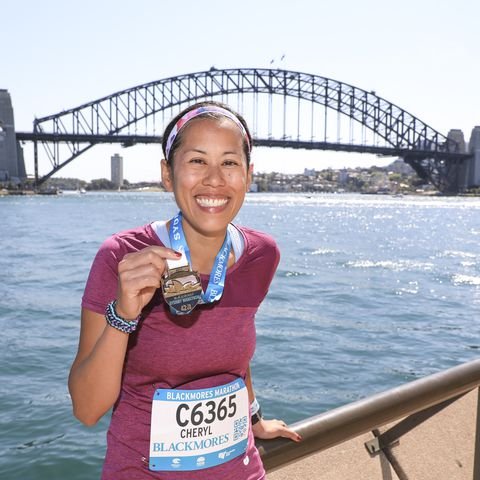 Cheryl Hile, now 45, first started running back in 1996 after gaining weight during college. She did it to lose weight, and also to bond with her boyfriend at the time, Brian Hile—now her husband—who was also a runner.

She remembers him coming home after a marathon feeling that mix of sorenessand elation, and she realized she wanted in on those long distances, too.

So in 2000, she signed up for her first race—and it was a full marathon.

“I wanted to feel that soreness!” Hile tells Runner’s World with a laugh. “Training was very difficult, but at mile 16 of the race, I just realized this is so awesome.”

[Smash your goals with a Runner’s World Training Plan, designed for any speed and any distance.]

Her competitive attitude has been a blessing, as it has helped her get through the ups and downs of a decade-plus battle with multiple sclerosis, a condition of the central nervous system which leads to communication problems between your brain and body. Through her diagnosis and beyond, she’s continued to use running as a way to stay grounded.

Fighting for a Diagnosis

In January of 2006, Hile had just completed the Phoenix Rock ’N’ Roll Marathon when she started experiencing some alarming symptoms: Electric shocks ran down her shoulders, from her ears to her knees to her back.

“They were so painful, and I also experienced a lot of numbness,” she says.

Her primary care doctor (PCP), who was also a sports specialist, thought the symptoms were just due to a pinched nerve, and wrote her a prescription for a nerve-numbing medication. But as months passed, the electric shocks and the pain got worse.

Hile eventually had an electromyography (EMG) to test for nerve conduction, which came back abnormal, and was referred to a general neurologist. The doctor ordered an MRI scan. 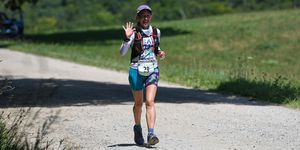 She Ran to Beat MS. Up Next? The Ultra Grand Slam 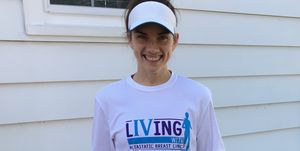 The results showed many lesions in her brain, and two in her cervical spine.

“The neurologist was still not convinced I had MS because I was a runner and very active—at that time, MS patients were commonly using wheelchairs, canes and walkers,” she says.

She fought to see an MS specialist, who confirmed what he thought with a spinal tap. Ten months after her symptoms first appeared, she finally had a diagnosis: multiple sclerosis.

“Multiple sclerosis is a disease in which the immune system attacks myelin, the coating on nerves of the brain, spinal cord and nerves to the eyes, disrupting signals from the brain and spinal cord to the body resulting, in symptoms such as numbness and weakness,” says Barry Singer, M.D., neurologist and director of the MS Center for Innovations in Care at Missouri Baptist Medical Center in St. Louis, Missouri. The autoimmune disease affects nearly one million people in the U.S., and woman are two to three times more likely to be diagnosed with it—and most who are diagnosed are between the ages of 20 and 50.

Before her MS diagnosis, Hile had already run 13 marathons. She was terrified of how MS would change her life—especially the running part.

“I was so shocked by the news,” she says. “Back then, I didn’t know anything about MS, and there wasn’t as much information available. I thought I was going to get every single horrible symptom.”

Hile says she became depressed, and at one point became suicidal. Her neurologist prescribed antidepressants, but she credits continuing to stay active with really helping her overcome her fear and anger.

“My husband really encouraged me to keep on running and exercising,” she says. “Moving made me feel so much better about myself and raised my spirits—I was addicted to the runner’s high.”

The benefit is not just anecdotal, though—staying active is one of the most important treatments for patients with MS.

“Exercise is critical for brain health. Since the central nervous system—brain and spinal cord—is under attack in MS, preserving the brain’s back-up reserves is critical, and a routine exercise regimen can help,” says Singer. “For people with very mild or no disability, running is an awesome option. I have a wide spectrum of runners living with MS in my practice, from casual joggers to marathon runners.”

Today, she runs every other day, and on days when her MS symptoms flare—when she experiences things like electric shocks or numbness—she opts for the ellipticalor bike. She’s also added in more weight lifting and exercises using a wobble board to help with balance issues, common in people with MS.

“The hard part with MS is not knowing how my body will react when I wake up in the morning,” she says. “Sometimes I wake up and I’m physically tired, so I have to adjust my training.”

She struggles with brain fog and mental fatigue along with the physical issues: Her right leg muscles have atrophied, and she has a drop foot—caused by two lesions in the nerve fibers of her cervical spine, which mess with the electrical impulses from her brain to her right shin.

“When I run, that electrical impulse is not rapid enough to lift my foot,” she explains. “As a result, my foot drops and drags, and I end up tripping over my own toes.”

To fight that, she wears a carbon-composite ankle-foot orthotic that helps her gait and prevent falls, and pushes off with the left side of her body while her right side follows along.

“My husband runs on my right side to keep me on a straight vector otherwise, because of my ineffective right side, I tend to drift to the right,” she says.

Before MS, Hile was running marathons around 4:10, and now she runs them around the 5:00 mark. Her husband now runs alongside her in races to help manage her pace, hydration, and balance. He also opens GU packets or water bottles for her when she needs them, since she has lost some mobility in her arms.

“I’ve adopted the run-walk method during my races, and it’s helped keep me in the game,” she says. She wears an extra-wide shoe that fits her leg brace, the Saucony Hurricanes, and sticks with moisture-wicking clothes that help keep her cool. (Another symptom of MS is heat intolerance.) 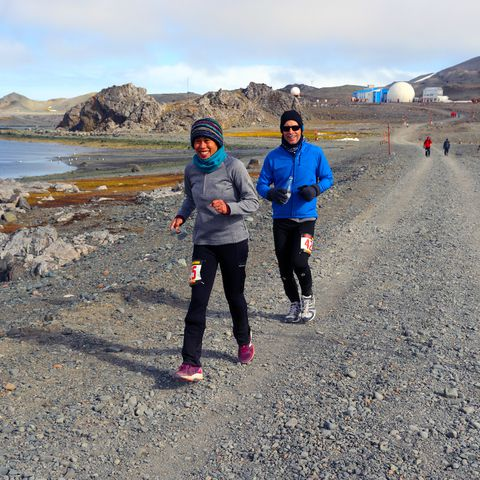 Hile has learned to find a new normal when it comes to running with MS.

“When I started tripping and falling, I went to my neurologist, and her words were to lower your expectations. That really hurt,” she says. “But from that day forward my mantra has been, ‘I do what I can and I never give up.’ Even if I have those bad MS days, I still do it, I still go.”

MS-related fatigue has made marathons more challenging lately, and she isn’t sure how much longer she can continue with the 26.2.

“MS fatigue makes all my symptoms worse; my foot drags more, my right leg feels heavier to lift, the neuropathic pain is stronger and more frequent, and I’m not as mentally strong as before,” she says. “It becomes harder to ‘tough it out’. My mantra is to never give up, but sometimes the pain and fatigue break me down and I just want to stop. That is when a walk break is in order and a pep talk from my husband is much needed.”

She’s already purchased a row bike in anticipation for when she’ll need more days off from running.

[Smash your goals with a Runner’s World Training Plan, designed for any speed and any distance.]

But she’s already accomplished some pretty major goals while running with MS: For one, she is the first person with MS to run a marathon on all seven continents, a feat she accomplished from September 2016 to September 2017.

And through running, she’s been able to raise awareness for MS by partnering with the MS MindShift campaign, which aims to educate people with MS on what they can do to keep their brain as healthy as possible for as long as possible.

Still, she’s not ready to hang up her running shoes just yet: This fall, she will run the Richmond Marathon for the second year in a row on the team she helped create, Team Run A Myelin My Shoes, which raises money for MS awareness and research. Last year, the team had 55 physical and virtual members, and this year, the team already has 100 members. (You can join the team here).

“With MS, there are a lot of uncertainties. It’s changed my whole life. But I’ve found running has elevated my body, my brain and my spirit,” she says. “And it’s helped me accomplish what I’ve set out to do—rather than mourn the things I’ve lost, I treasure what I still can do.”

EMILY SHIFFEREmily Shiffer is a former digital web producer for Men’s Health and Prevention, and is currently a freelancer writer specializing in health, weight loss, and fitness.
Multiple Sclerosis: It's Not The Disease You Thought It Was
Overcoming MS: Tips for recovery from an MS attack
The Gut Microbiota and Multiple Sclerosis | Dr. Jens Walter | MS Society of Canada