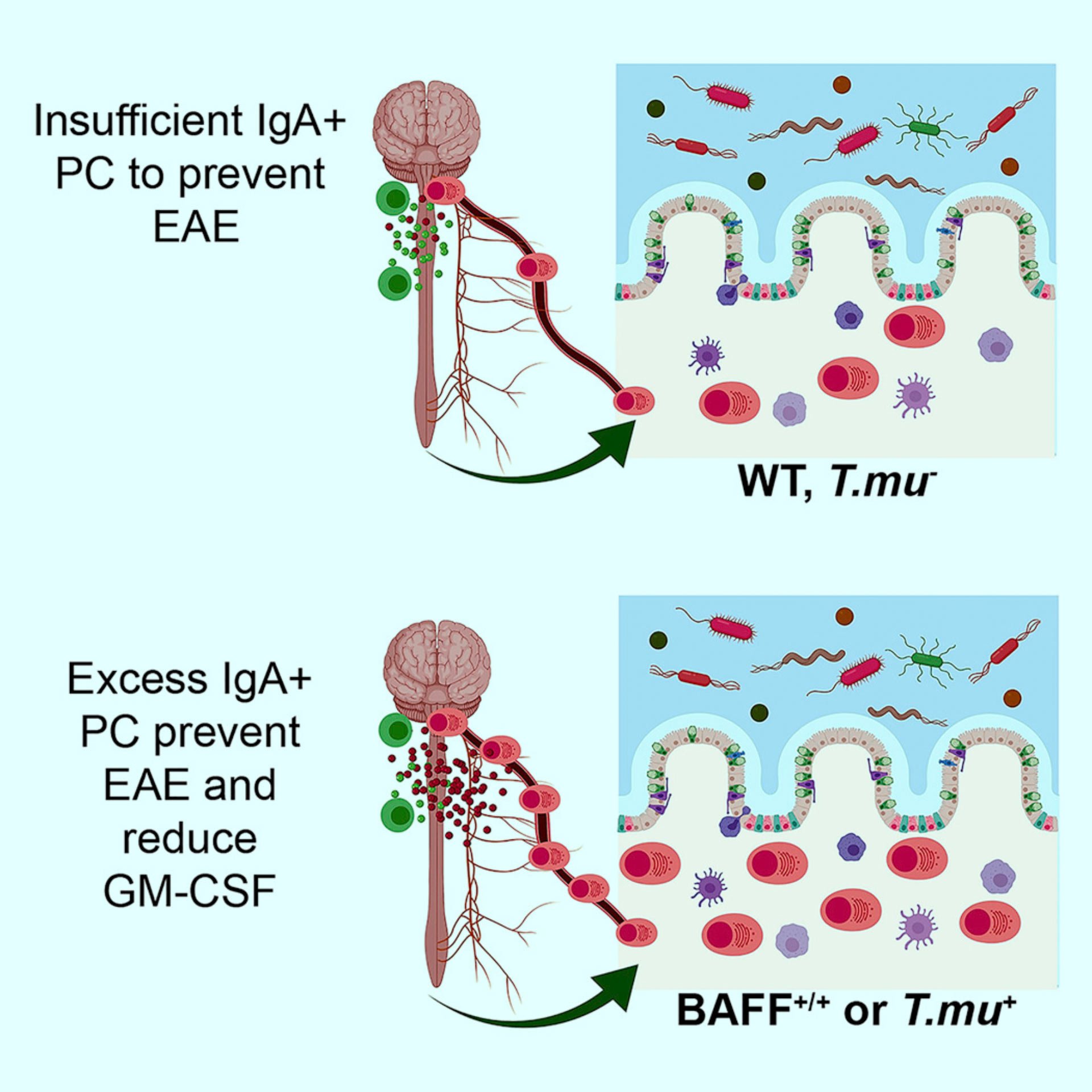 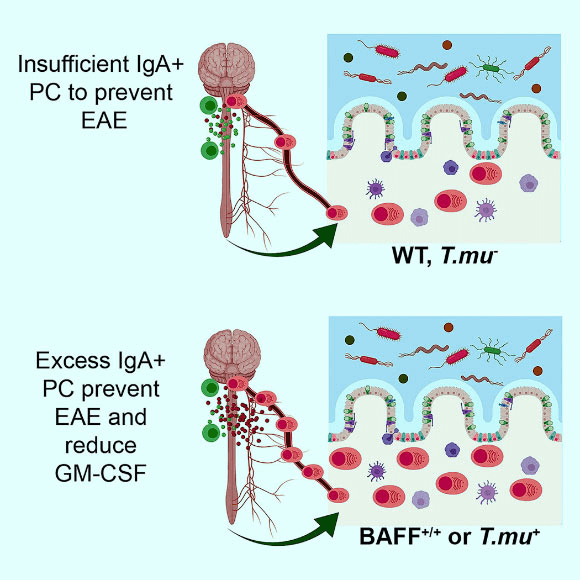 Plasma cells (PC) are found in the central nervous system of multiple sclerosis patients, yet their source and role in multiple sclerosis remains unclear. Rojas et al find that some PC in the central nervous system of mice with experimental autoimmune encephalomyelitis (EAE) originate in the gut and produce immunoglobulin A (IgA). Moreover, the researchers show that IgA + PC are dramatically reduced in the gut during EAE, and likewise, a reduction in IgA-bound fecal bacteria is seen in multiple sclerosis patients during disease relapse. Image credit: Rojas et al, doi: 10.1016/j.cell.2018.11.035.

Plasma cells are white blood cells that originate as B cells in the bone marrow but change their behavior when triggered by microbes in the gut.

Multiple sclerosis is an autoimmune disease, driven by other types of immune cells — including B and T cells — that attack myelin, the protective coating that surrounds nerve fibers.

Recent clinical studies have shown drugs that target B cells mitigate multiple sclerosis, while those that target plasma cells make the disease worse.

The new study, published in the journal Cell, offers an explanation for these divergent results.

“We already knew what was and was not working in the clinic,” said University of Toronto’s Professor Jen Gommerman, senior author of the study.

“But here we’ve uncovered the molecular and cellular mechanism at play. It’s a kind of reverse translation approach, which highlights the importance of the gut-brain axis in multiple sclerosis and other autoimmune conditions.”

“IgAs comprise 80% of all antibodies in the body, yet their exact function is still not fully understood,” said study co-author Professor Sergio Baranzini, from the Department of Neurology and Weill Institute for Neurosciences at the University of California.

“Showing that IgA-producing B cells can travel from the gut to the brain opens a new page in the book of neuroinflammatory diseases and could be the first step towards producing novel treatments to modulate or stop multiple sclerosis and related neurological disorders.”

The researchers found evidence that IgA was decreased in fecal samples from patients with active multiple sclerosis neuroinflammation, suggesting that the inflammation-suppressing cells had been recruited to help fight the patients’ disease.

One promising aspect of the study is that increasing the number of IgA plasma cells that migrate from the gut to the brain eradicated neuroinflammation in mice.

A therapeutic approach might aim to expand the number of these cells in the gut, enabling a plentiful supply that could move to the brain and dampen inflammation.

A key next step for the team is to figure out what bacteria in the gut promote the generation of immunosuppressive IgA plasma cells.

“If we can understand what these cells are reacting to, we can potentially treat multiple sclerosis by modulating our gut commensals,” Professor Gommerman said.

“That might be easier than getting drugs into the brain, which is a strategy that hasn’t always worked in multiple sclerosis.”

The study also raises questions about the microbiome and lifestyle choices.

Do certain lifestyles nudge some people toward a gut microbiome that allows immunosuppressive plasma cells to flourish? Are specific foods conducive to creating that environment and if so, might a drug or supplement mimic the effect?

Genetics are just one factor that affect susceptibility to multiple sclerosis; the current study highlights how non-genetic factors may confer disease resistance.