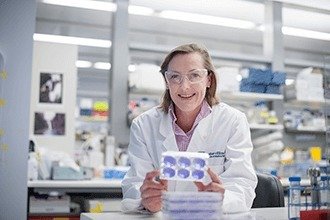 Professor Gabrielle Belz is studying how the immune

response generated in the gut could protect against

Professor Gabrielle Belz has been awarded a $213,000 grant to discover how immune cells in the gut make antibodies that protect the brain against multiple sclerosis (MS).

The funding, provided by MS Research Australia, will support a three-year project into the role of immunity generated by the gut in MS.

Professor Belz said she believes she can resolve a key mystery linking the immune response generated in the gut and its role and impact in the brain.

“In MS, the immune system mistakenly attacks the insulating layer of nerve fibres – called myelin ­- in the brain and spinal cord during episodes of inflammation,” Professor Belz said.

“However not all immune cells are involved in this destructive mechanism. There are types of immune cells that promote protection of the brain and spinal cord.

“These protective cells are part of a complex network that originates in the gut. These immune cells can act in the intestine itself, but most surprisingly they can travel around the body to distant sites such as the brain and spinal cord where they can dampen down the harmful impact of inflammation occurring in MS.”

Professor Belz said very little was currently known about how signals from the gut and from food activate immune cells in the gut.

“MS is a complex disease. While MS symptoms involve the brain and spinal cord, it is now thought that what happens in tissues such as the gut play a significant role in the development and progression of MS,” she said.

“In the past it has not been possible to tease this problem apart, but my research team has developed new tools that will allow us to probe these interactions, with generous funding from MS Research Australia.”

This discovery will also offer potential new targets for treatment of MS through modulation of the immune response.

“Our models will reveal important new knowledge about gut immunity and how it contributes to MS,” Professor Belz said.

“We hope that this knowledge will lead to novel new molecules that could be targeted in MS. This would be an exciting step forward in developing potential new treatments, providing new options for improved disease management for people living with MS.”

“Australia is home to exceptional talent in the area of multiple sclerosis research and we are excited to see the results of Professor Belz’s research efforts in the coming years,” said Dr Miles.

“Her team’s findings will contribute to our understanding of MS and accelerate progress towards achieving our ultimate goal to stop and reverse MS.”

/Public Release. View in full here.
Multiple Sclerosis: It's Not The Disease You Thought It Was
Overcoming MS: Tips for recovery from an MS attack
The Gut Microbiota and Multiple Sclerosis | Dr. Jens Walter | MS Society of Canada