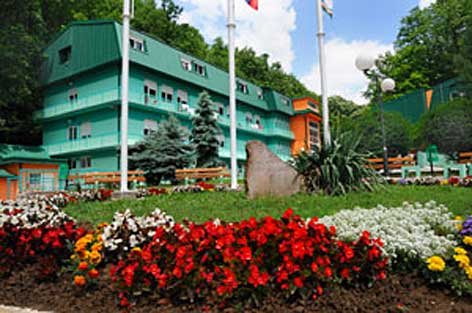 The Atomic Spa at Gornya Trepcha in Serbia has significant results in helping people with Multiple Sclerosis,  A Canadian/Serbian business woman, (Debbie Bozic), along with the Beyond MS Association previously sent two MS people there who both received dramatic improvement with their health and MS symptoms.

Clinical researches in the field of Multiple Sclerosis

1. One of the most important researches was the study that included 151 patients with multiple sclerosis. Examinees were in a rehabilitation treatment in a special hospital for rehabilitation ’Gornja Trepča’ in the Atomic Spa in the period from March till August 2010. Fatigue was assessed on the Fatigue Severity Scale (FSS) and depression on the Beck Depression Inventory Scale (BDI), before and after the treatment. The quality of a life was assessed on the basis of MSQOL - 54 questionnaires. The results show the highly statistically significant decrease in fatigue after the rehabilitation in the Atomic Spa that is correlated with a significant reduction in depression. The results of this research were published in the journal Disability and Rehabilitation in August 2012.

2. A promising clinical study included 66 patients who were on a rehabilitation treatment in a special hospital ’Gornja Trepča’ for a period of three weeks. The criterion for inclusion of patients in the study was a revised McDonald diagnostic criterion from 2005, as well as the value of the EDSS scale from 4.0 to 6.5. The treatment implied hydrotherapy in Ca, Mg, hydrocarbonaceous, oligomineral, hypothermal water (29º C), physical therapy, magnetic therapy. The following parameters were monitored before and after the completion of a treatment: the test of the movement ability (a 6 minute-walk test- 6MWT) and the maintenance of a balance test (Step Four Square Test- FSST). The tests MSWS-12 (12-item MS Walking Scale) and BBS (Berg Balance Scale) were measured just before the beginning of the rehabilitation treatment.
Conclusion: The analysis of received data showed that the use of the balneophysical therapy in the Atomic Spa for a period of three weeks in patients with multiple sclerosis benefited from the increase in walking distance and balance, which facilitates the activities of a daily life.

3. At the end of 2011 the cooperation and examining of the effect of water were begun, in experimental (laboratory) conditions, with the Institute of Anatomy, Faculty of Medicine in Belgrade and the Institute for neurobiological studies in Hamburg. In early 2012, the research was approved in all instances, and it was commenced at the end of February of the same year. The experimental research phase was completed at the end of June 2012. The aim of this study was to determine the nature of the effects of mineral water of the Atomic Spa 'Gornja Trepča' on the regeneration of injured spinal cord neurons in animal models of mice. The results of this experiment indicate that the size of the created scar tissue is greater in the experimental group of animals which received the treatment with water from the Atomic Spa 'Gornja Trepča’, while in the control group there was no a scar formation. Many studies have shown that lithium, which is the dominant element in the water of the Spa ’Gornja Trepča’, stimulates neurogenesis in both the in vitro and in vivo conditions.

The Beyond MS Association is organizing another sojourn to Gornya Trepcha in the Spring of 2019. If you are interested in participating please send Richsrd Beecroft an e mail: rdhbeecroft@gmail.com .